Skip to content
Sign up for our newsletter
section-ads_high_impact_1
By Sandra Chereb Special to the Las Vegas Business Press
January 26, 2015 - 1:39 pm 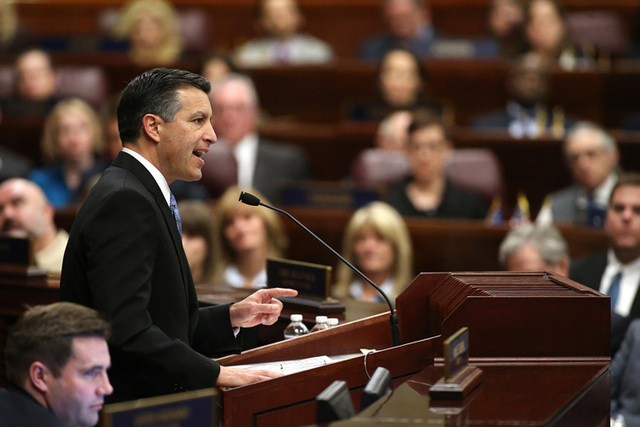 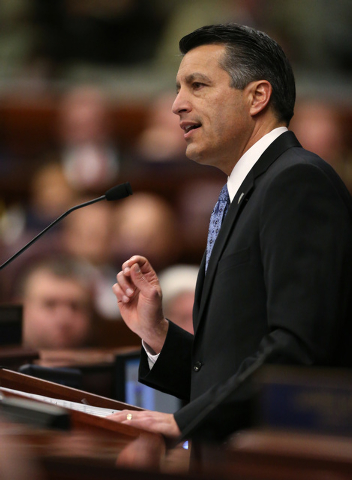 CARSON CITY — Taxes and tax reform will dominate the 2015 Nevada Legislature when lawmakers convene Feb. 2 and the battle begins over who pays and how much.

Republican Gov. Brian Sandoval, who coasted to a second term in November’s election, has proposed a $1.1 billion tax package that would make permanent $580 million in taxes originally slated to expire four years ago and add more than $430 million in new revenue by revamping the state’s business license fees.

“I realize these decisions are difficult. I know I am asking a lot from the business community,” Sandoval said in his State of the State address Jan. 15.

He has targeted the revenue to education in his proposed $7.3 billion two-year spending plan.

Businesses big and small pay $200 for an annual license. Sandoval’s proposal would double the minimum to $400 for the smallest businesses and escalate to $4 million for the largest companies based on gross receipts.

It would be in addition to the Modified Business Tax assessed on payroll. The mining industry, however, would see its payroll tax rate increase to 2 percent, up from the 1.17 percent levied on general businesses, to extract another $14.6 million.

Sandoval also wants to increase cigarette taxes 40 cents per pack to $1.20 to raise $78.3 million, and impose a new tax on restricted gaming licensees with more than 500 slot machines or revenue of at least $10 million to bring in $39 million.

More than a dozen bill drafts requested by lawmakers in advance of the session deal with taxes. Most are placeholders and have not yet been drafted with specific language and details.

A report by the Tax Foundation commissioned by the Las Vegas Metro Chamber of Commerce and released last month recommended broadening and simplifying Nevada’s tax structure — as opposed to enacting new levies — as a way to stabilize revenue and cushion the blows from economic downturns.

Nevada coffers are heavily reliant on revenue streams that are prone to wide gyrations in discretionary spending, such as sales and gambling taxes.

Extending the sales tax to services has been talked about but appears unlikely this session. Sandoval, however, wants businesses to file reports with the Taxation Department on service sales so a potential tax can be studied.

For business owners, there is a lot of uncertainty going into the 2015 legislative session.

But some predict with Republicans controlling the governor’s office and both houses in the Legislature for the first time in decades, the business community has much to look forward to.

The proposed increase in business license fees aside, “Business owners should be excited about this upcoming session,” said Randi Thompson, state director of the National Federation of Independent Business, a small-business advocacy group.

“I’ve been doing this since 1993,” Thompson said. “I have been on the defense almost every legislative session, and I’ve worked to kill bills that are going to hurt business session after session.

“So I’m optimistic that we’ll actually be able to implement some bills that will be better for business in Nevada,” she said.

Some topics on the radar:

Nevada requires employers to pay overtime for work in excess of eight hours a day. Instead of the daily threshold, Thompson would like to see the overtime provision kick in after 40 hours in one week.

The existing law “hurts small businesses, especially those that are thinly staffed and don’t have people who can fill in a role,” Thompson said. She offered as an example a worker at a convenience store who goes home early because of illness, requiring someone else to stay later or come in early, exceeding an eight-hour shift.

“It really hurts minimum wage workers and it hurts business owners,” she said.

Although the governor has proposed higher business license fees, conservative Assemblyman Ira Hansen, R-Sparks, has a bill to exempt small, home-based businesses that gross less than $60,000 in annual income from the requirement.

Republicans also want to change Nevada’s prevailing wage law, which dictates how much workers on public construction projects must be paid. Critics argue prevailing wages are inflated by union shops and don’t accurately reflect true wages paid for similar work on nonpublic projects. Lowering the threshold for when prevailing wages apply, or repealing the law entirely, would save taxpayer dollars and open the bidding process to small employers, critics say.

Reforming Nevada’s law on construction defects has long been a priority for Republicans. Critics of the law adopted in 1995 argue that what was intended as consumer protection has morphed into a trial lawyer’s money trough and a nightmare for Nevada’s building trades. They blame the law for skyrocketing insurance costs and putting many out of business.

One bill pre-filed for the upcoming session has bipartisan sponsors. It is intended to give some protection to subcontractors who get sucked into litigation, even though their work is not an issue.

Sandoval in his State of the State speech called on lawmakers to pass reform to help revive Nevada’s housing market and create jobs.

Thompson said while the issue of construction defects may seem industry specific, its effects on the economy are wide-ranging.

Tax debate will not be limited to the governor’s proposals.

As speaker of the Democratic-controlled Assembly in 2013, Kirkpatrick took on the law that critics say is convoluted and riddled with exemptions. It’s based on venues, but large outdoor gatherings such as the Electric Daisy Carnival and Burning Man are exempt. So, too, are NASCAR races and minor league baseball games.

In the Democratic response to Sandoval’s State of the State address, Kirkpatrick suggested changing the live entertainment tax could ease tax burdens on lower-wage earners and small businesses.

“Should someone able to pay $5,000 for table service at a nightclub pay a little bit more so that we can lower car registration for regular folks? Absolutely,” she said.

The payroll tax also will be scrutinized. Although many don’t like it because it taxes employment in a state eager to create jobs, they also concede it is a stable state revenue source.

Enacted in 2003, the tax was amended in 2011 to exempt the first $62,500 in quarterly wages after deductions for employer-paid health care benefits. In 2013 the exemption was raised to $85,000 per quarter, although that provision is supposed to expire at the end of June. General businesses pay a rate of 1.17 percent for wages over the threshold.

Financial institutions do not enjoy an exemption and pay a 2 percent rate on all wages after health care deductions.

“Let’s stop exempting … and let’s not double the burden on the finance and banking industry.”