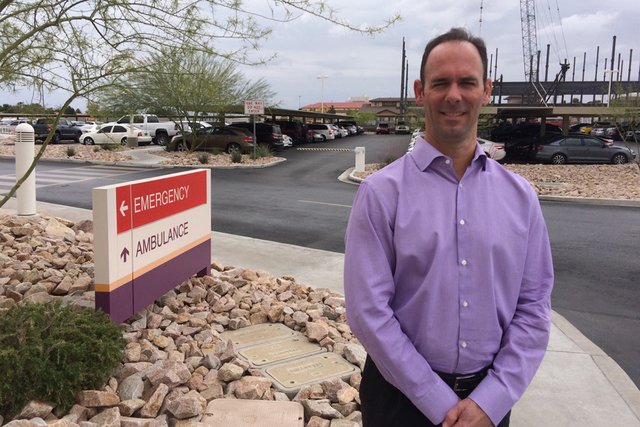 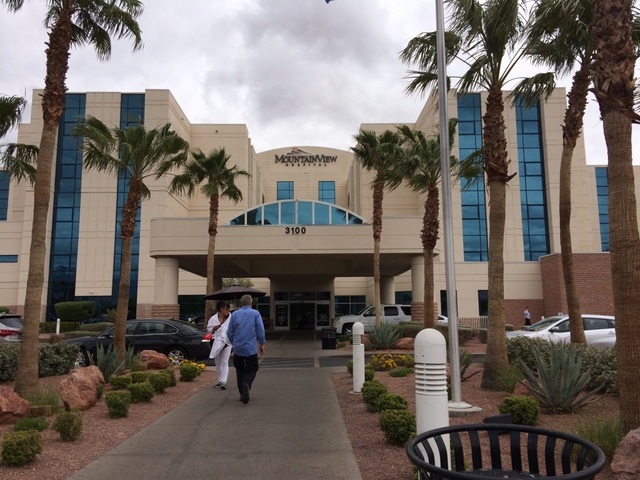 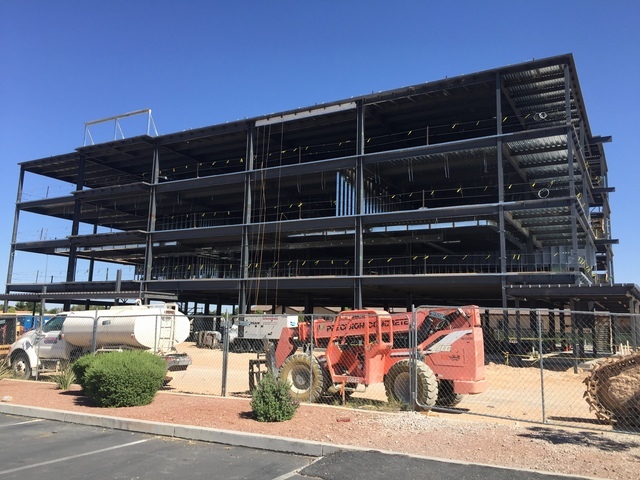 Construction is moving along on the medical office building that will house the medical residency programs at MountainView Hospital. (Courtesy)

MountainView Hospital is set to launch a residency program in July to train 53 medical graduates in multiple specialties with the hope that many of the doctors will remain in the community to practice once they complete their training.

MountainView is constructing an 80,000 square-foot four-story medical office building that will be completed by the first quarter of 2017. The first two floors will house its graduate education program in affiliation with the University of Nevada School of Medicine. The program is approved by the federal government to train as many as 104 physicians over the next four years, and that number is likely to expand.

“HCA as a company a number of years ago had a vision and understanding that the physician shortage is really impacting our community and community hospitals. We need physicians to take care of our patients, and they began to align with the GME (Graduate Medical Education) initiative where our hospitals had no training programs before,” said Dr. Darren Swenson, MountainView’s chief medical officer and founding designated institutional official. “HCA has launched a very large initiative to build training programs and residency training programs at a number of hospitals around the country and MountainView is one of them.”

The Center for Medicare and Medicaid Services offers hospitals an opportunity to build training programs as part of the Affordable Care Act of 2010, Swenson said. More people were added to the Medicaid rolls and more people are covered by insurance, and there’s a need for more doctors to serve them, he said.

“One of the points of the training program is to retain the physicians after they complete their training,” Swenson said. “We want to keep them in our community and this is one of the mechanisms to introduce them and build relationships.”

“Each of these residents have completed four years of medical school training, and now they are beginning the final stage of their journey to becoming independent physicians, the residency training years,” Swenson said.

HCA’s only existing training program in Las Vegas is through Sunrise Hospital and its pediatric residency program with the University of Nevada School of Medicine, Swenson said.

The residency program for internal medicine is a three-year program and will start with 20 residents in July and a second group of 20 will be added next year and subsequent years to have a ceiling of 60 positions, Swenson said. The 20 were selected out of more than 1,200 applicants.

“It was remarkable,” Swenson said. “We had a strong program that generated a lot of interest from graduating medical students from around the country. There is a desire to get their training in Las Vegas. We were deemed to be very attractive to them.”

Of the 28 surgical residency positions, 13 will be filled July 1 for the first through third years of training under the five-year program, Swenson said. That brings the total between internal medicine and surgery positions to 53 to start. The remaining 15 surgical positions will be filled over the next three to four years, he said.

“We were notified earlier this year we were approved for the (surgical residency positions) and we went through a bulletin board to notify candidates and we had several hundred applicants within three days,” Swenson said.

The start of the OB-GYN residents coincides with the expansion of MountainView Hospital’s Women’s Services Department, as part of a larger $90 million, multi-phase campus expansion.

“We have a growing community and, as you look at the age demographics of the younger population, they are starting families and they need to get maternal fetal care,” Swenson said.

CMS supports the program with grants that pay the salaries of residents during their course of training. It also helps pay for their training. Residents earn somewhere between the high $40,000s to the low $50,000s, he said.

The internal medicine residency program will help train the next wave of primary care doctors to deal with an acute shortage in Nevada that ranks as one of the worst in the nation in doctors to its population.

“You look at the significant population growth that’s anticipated over the next 10 years, we need to have primary care doctors to take care of our community,” Swenson said. “If we don’t have enough primary care doctors, hence the internal medicine program, we find the community ends up using urgent care and emergency rooms. We want to make sure we’re doing preventative care and not reactive care.”

MountainView is eyeing starting a family medicine residency in the next two to three years in addition to starting other programs as well, Swenson said. The hospital has a five-year window from the beginning of its first resident to start as many program as appropriate to meet the physician shortage, he said.

“We’re looking at other physician shortage areas like neurology and are looking at statistical data to see what other shortages there are in Southern Nevada,” Swenson said.

Under the program, residents have no contractual obligation to stay in the community when they finish training, Swenson said. The goal is to have between 50 percent and 65 percent of graduating residents stay within 50 miles of where they train, he said.

“The onus is on us as MountainView and HCA as well as the community to maximize their experience while they’re training here to embed them within the community and make this their home so that they want to find a practice to join and stay here and take care of our patients,” Swenson said. “We would fully anticipate that as doctors train here that they will make this their home as MountainView as a hospital as well as the HCA system. We hope that as they grow in our community, they will come back to us to take care of their patients, whether they are surgical procedures or patients who need primary care and emergency room services and help to support their patients.”

For the internal medicine residents, the first year is about caring for the patients, taking their history by sitting down with patients and talking with them and understanding their complaints. They use diagnostic data such as labs and radiology studies to formulate a plan of care for that patient, Swenson said.

“They also understand what the appropriate level of care is,” Swenson said. “Can a patient be discharged from the emergency room and followed up through a primary care doctor or do they need to be admitted to the hospital for ongoing care and further diagnostic studies.”

In the second year and beyond, they learn specialties such as cardiology, gastrointestinal disorders and spend time with patients with a medical specialty such as infectious disease and critical care and kidney disease. They also spend time taking care of the general medical patient in the hospital, Swenson said.

MountainView is adding patients to its continuity clinic in anticipation of residents starting in July, Swenson said. That is a place where the resident physicians can build a relationship with patients in the community, he said.

As part of the Graduate Medical Education program, a Clinical Research Department is being established to bring in the most recent clinical research, he said.

In general surgery during the first year, it’s about learning surgical techniques and basics of suturing and how the operating room works. It’s also doing the proper history and physical to determine a plan of care and whether the patient needs surgery or further evaluation, Swenson said.

Beyond that, the surgical residents spend time in subspecialty areas such as trauma and critical care surgery, pediatric surgery and transplant surgery. It’s more refined and specific, and they also continue to work on the general surgical team throughout their training, Swenson said.