Skip to content
Sign up for our newsletter
section-ads_high_impact_1
By STEPHANIE ANNIS SPECIAL TO THE las vegas business press
April 13, 2015 - 12:20 pm 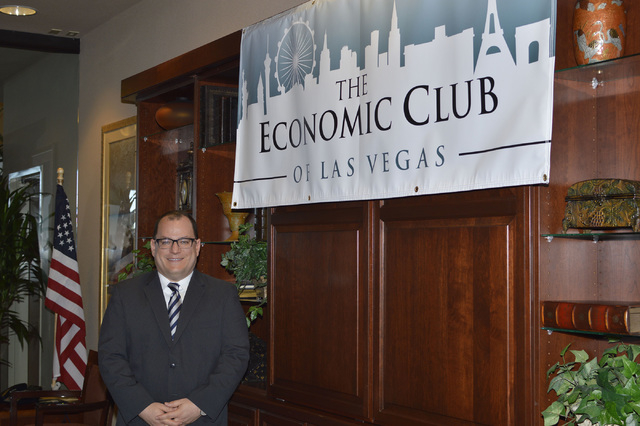 Jonathan Galaviz is a partner with Global Market Advisors, a research consultancy that provides economic and feasibility studies, particularly to the gaming and hospitality industries. Then firm also is involved in public policy research and advocacy.

He grew up in Orange County, Calif., before attending the New Mexico Military Institute, a state junior college. Galaviz served as a paid staffer for U.S. Sen. Pete Domenci (R-New Mexico) in Washington D.C. before attending the University of Texas at Austin. He received a scholarship to study abroad at the National University of Singapore where he spent a year studying finance amidst the Asian financial crisis of 1997. He later earned an MBA at Oxford University in England.

In late 2013, he and Steven Miller, a professor of economics at UNLV, founded the Economic Club of Las Vegas. Today, Galaviz is the president of the club.

Q. How did the Economic Club of Las Vegas get its start?

A. I’m a member of the National Association of Business Economics, a Washington, D.C.,-based association of business economists. There was a discussion a couple years ago about possibly creating a NABE chapter in Las Vegas; but we thought we’d like to ratchet it up a bit.

Stephen Miller, who’s a professor of economics at UNLV, and I began brainstorming on what might be a better approach or platform to be inclusive of a NABE chapter but to take it up a notch and really focus on creating a nonprofit platform that would be able to bring the business community together and leaders of the Las Vegas business community and political figures as well and combine that with nationally and globally renown speakers that can speak on national topics of economics and politics.

Our thought was to create a club or organization that would emulate and try to be similar to them.

Q. What was your motivation for creating a new Economic Club here in Las Vegas?

A. It engages business leaders that may not normally be exposed to the world of economics. If it was just a chapter of NABE, the focus would be almost purely on economics and the only people you would have attending would be economists, and the only people speaking would be economists. Whereas, when you create an economic club, the strategic mission is really saying we’re going to take top business leaders and highly recognized executives from our business community and have them be a part of an organization that can be prestigious but not elitist. So add prestige to a platform that will attract nationally and globally renowned speakers to come to a place like Las Vegas to give a speech.

Q. Who belongs to the Economic Club?

A. The economic club has a very robust board of directors comprised of CFO’s, CEO’s, and community leaders in Las Vegas that understand the importance of thinking about Las Vegas in the global context and believe in the idea of raising the national awareness of Las Vegas as a place where national debate and national discussion on topics of the economics and politics can occur.

Q. How does someone become a member?

A. The economic club doesn’t have any membership. The events that the economic club holds are open to the public. There’s a ticket fee for events. Our events that we’ve held so far have had upward of 150 people from Las Vegas attending them. The cost has range for a ticket to one event from $35 all the way to $100. Of course, we’re a nonprofit organization, so the ticket costs and the revenues from the events just cover the cost of the event and any type of accommodations we provide for speakers.

Q. Who typically attends these events?

A. The attendees at our events are a very great audience — all the way from financial community to the academic community and the business community in addition to just people that may not necessarily be working in economics or finance or thinking about global issues on a day-to-day basis but like the opportunity to engage and have exposure to speakers that normally would not be in Las Vegas.

Q. Who’s been your favorite speaker?

A. Probably, so far, I would say Dr. Allan Meltzer from the Carnegie Mellon University. He was actually the first speaker of economic club that we had (at) our first event. In addition to his very robust work that’s globally recognized as great work in the field of economics, he’s a recognized thought leader in the world of economics. He has a great sense of humor and really resonated well with the audience. We had about 130 people at that event.

Q. What events are coming up?

A. We have Gen. Wesley Clark, who is the Supreme Commander of NATO and a former presidential candidate. He’s coming in mid-June to speak. So, that should generate a lot of news and excitement. Information is available on the website http://econclublv.org

We are on the calendar or the queue if you will for various presidential candidates that will be visiting Las Vegas as one of the platforms or outlets that they will be speaking to when those events start occurring in late 2015, 2016.

Q. Does your role as president of the Economics Club interact with your role as a partner with Global Market Advisors?

A. Yea, of course. Every officer of the club and every board member of the club serves in a volunteer capacity. Certainly, I think that my business is a corollary example that there is an intellectual heart that beats in Las Vegas; in that, having an organization that has a singular mission, not only exposing the community to nationally and globally renowned speakers that come into speak but also exposes those speakers to the idea that Las Vegas has something more to offer than just casinos and gambling.