Skip to content
Sign up for our newsletter
section-ads_high_impact_1
By Stephanie Annis Special to the Las Vegas Business Press
April 6, 2015 - 3:00 am 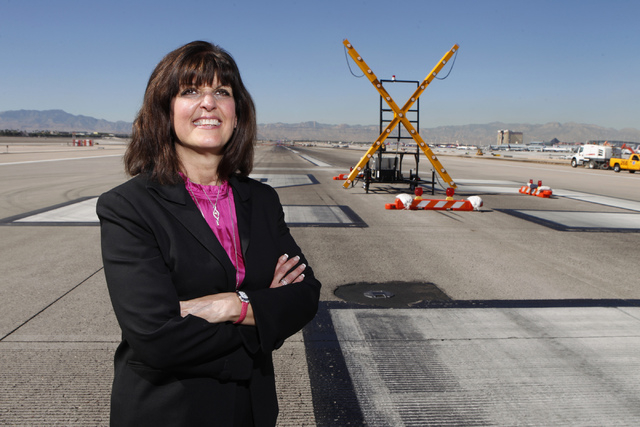 Rosemary Vassiliadis arrived in Las Vegas from Chicago in 1983, a young newlywed with a bachelor’s degree in accountancy from DePaul University.

“It was a phenomenal time,” she recalls. “The city itself was really developing.”

In early 1984, she took a position as a financial analyst for the City of Las Vegas. She worked her way up and became the chief of budget and finance for the City of Las Vegas before moving over to the county department of finance. She spent a couple of years as the county’s director of finance until 1997 when she joined the Clark County Department of Aviation as the deputy director. In March of 2013, when Randy Walker retired, she was appointed director.

Each of the five airports has a different purpose. “McCarran is the only commercial airport” Vassiliadis said. “North Las Vegas, I mean, there’s not room at the inn; it’s just full. It does the little guys, the propeller airplanes, the weekend people that like to fly in and out of here. It’s just so convenient for them to land there and still get to downtown or the strip.” The Henderson airport is considered the executive airport and, she explained, “it is a bit higher class as far as… what is offered there… We are trying to… entice some of the corporate activity…with the amenities it has.” She said the Jean airport is used for “enthusiasts… the sky gliders and the plane jumpers, parachuters, things like that. We have preserved the air space for them to be able to do that.” Last but not least, “Overton is just kind of like just a neighborhood. It’s just residents…there’s not any other type of business activity… it grew into its own little neighborhood of people.”

Q. How has your experience with the Department of Finance and your background in accounting helped you in the role as director?

A. Having that financial base, knowing how a budget works… it’s a foundation. We, the airport, have to be very concerned with what our rates and charges are for airlines. At the end of the day, (the money) has to come from somewhere. I believe having that financial background and knowledge really helps.

When you grow as fast as we grow, grew, and starting to grow again…having to build what we had to build, we had to bond. Our debt portfolio is very hefty. It’s very complicated. Because we have commercial activity here, we have some taxable bonds and part of our portfolio that traditionally governments do not have; but, we have no tax dollars and that gives us flexibility on what we can bond for and how we bond.

Q. How is the department of aviation funded?

A. We’re funded through fees and charges from the airlines on one side, and that’s about 50 percent of our funding. And then the other 50 percent is all the concessions and the parking. Advertising (is) another unique review we do have…so that’s a very nice stream of revenue.

Q. As the new director, since March 2013, what changes have you implemented and why?

A. Randy Walker retired after we opened Terminal 3. Terminal 3 consumed our lives for about eight years before that and it changed our operation completely. After T3 was completed…and we’re done building that type of project…we’ve built out McCarran at this point. I think there was and continues to be a natural evolution at the airport.

Now, the past two years, we’ve really been looking at the operation. Is it the most effective? Is it efficient? We just really didn’t have time to do that before and we’ve really just been doing all sorts of studies… is it working? I’m happy to say most places are working but there’s always efficiencies you can inject into any operation.

Our initiative right now is a customer service culture. We have to be part of the experience… we’re the first and last look. We have to take that very seriously. We have to make everyone feel relaxed, at ease, and special. So, we are starting that messaging; we’ll be rolling it out in several different forms. Instead of just saying it, we are living it with all our partners here. I hope that makes a difference and I think it will.

Q. How was the Department of Aviation and McCarran affected by the recession and do you feel like you’re back to recovering?

A. Yes we were impacted immediately because airlines started to cut. The supply and demand got all out of whack and so that impacted us and our numbers went down; they went down drastically. Thank goodness we have a very strong financial basis.

Almost at the same time, international started to take advantage — the dollar is weak here, it soars there. Our international growth from 2009 til today is crazy; it’s 60 percent grow. Very slowly we were OK because the internationals were coming and it just kept growing.

In 2009 we had to make the decision whether to construct Terminal 3. We had already designed it; we had already relocated Russell Road; we had already bought the homes to expand. We did all of that but when everything just kind of fell. Now we’re ready for construction. What do we do?

We made the tough decision and I give so much credit to our county commission. One thing this town always does is reinvents itself.

Q. What is different or unique about McCarren?

A. A very important point that makes this airport unique is that we know we’re part of the economic engine. So we partner with the convention authority on many events but we also know what our role is; our role is to bring people here to Las Vegas to occupy a hotel room at the end of the day.