Skip to content
Sign up for our newsletter
section-ads_high_impact_1
By RODRIC HURDLE-BRADFORD Special to Las Vegas Business Press
August 14, 2016 - 11:56 pm 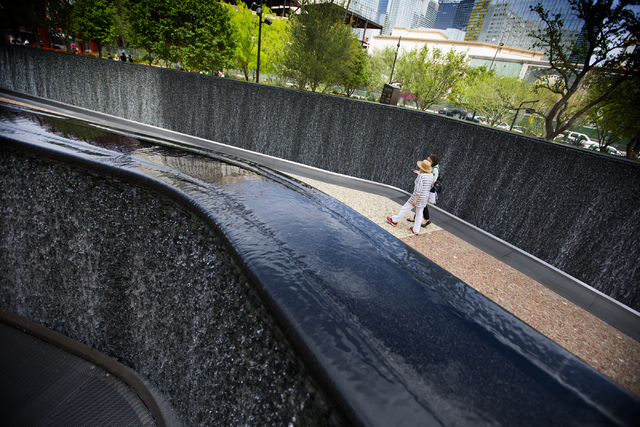 Women walk through a water feature at The Park on April 4. (Jeff Scheid/Las Vegas Business Press)

By sight alone, tourists on the Strip can easily forget where they are at on the globe. A Tuscany village in Italy? A romantic night in the Eiffel Tower in Paris? Bustling through a busy, big city night in New York City?

But for MGM Vice President and Chief Sustainability Officer Cindy Ortega, the development of The Park in the middle of the Strip needed to have an authentic desert Southwest feel while setting new standards of efficiency with vegetation.

For those locals who may have been sleeping under one of the red rocks used in its design, The Park is an immersive outdoor dining and entertainment district connecting New York-New York, Monte Carlo and T-Mobile Arena.

“The Park is important because we choose this land in the middle of the Strip to convey to everyone that our region’s ecosystem is important and beautiful,” Ortega said. “We had to show our guests that we could create a beautiful landscape using our native plants while making it an environmentally friendly concept. It always starts with the design and the ability to hold true to the principles of the project.”

The principles of The Park were developed by a partnership between MGM Resorts and !melk Landscape Architecture &Urban Design, based in New York City. The !melk team did extensive research to identify strategies and tactics to maximize efficiency, making numerous visits to Las Vegas and the Mojave Desert to study the geographic and geologic context of the area. Its goal was to create a place that is directly and authentically inspired by the city’s context, history and landscape, while paying homage to the microcosm of the surrounding Mojave Desert.

“We needed to feature as much desert vegetation, cacti and plants as possible, because we were building a park, not a plaza,” Ortega said. “We have to water the most thirsty plant, so it was important that almost everything came from the desert so there is a perfect balance. There is a real science and art to landscape architecture by placement of plants in the right places.”

To go along with the plants, MGM Resorts locally sourced many of the materials found within The Park, including sandstone planters. Red meta-quartzite stone was sourced from Las Vegas Rock’s Rainbow Quarry, 30 miles from the site of The Park, and is featured in the planters.

“Both tourists and locals are very cautious about the environmental impacts of projects now, so we have responded to that since the design phase of The Park,” Ortega said.

It is a demand that is further serviced by the LEED Gold Certified restaurant buildings that surround The Park. The restaurants Beerhaus, Sake Rok, Bruxie and California Pizza Kitchen all optimize efficiency in energy, water and waste for construction and operations. To keep The Park watered efficiently, point-source drippers are used that conserve 72 percent more water than traditional sprinklers.

“We achieved our goal of conveying a message and creating an experience,” Ortega said. “The planters and the pretty flowers are nice to look at, but they are native and telling our story of the desert to millions of people at the same time.”