Skip to content
Sign up for our newsletter
section-ads_high_impact_1
By BUCK WARGO SPECIAL TO LAS VEGAS BUSINESS PRESS
December 27, 2016 - 7:17 am 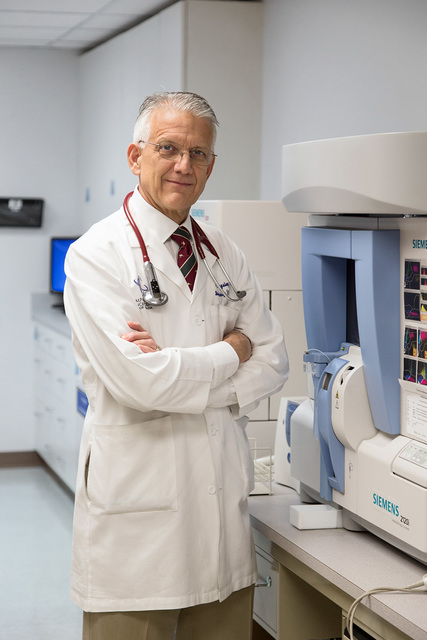 David Reisman/Las Vegas Business Press Dr. Edwin Kingsley, a medical oncologist and hematologist and one of the founding members of the Comprehensive Cancer Centers of Nevada, wants to bring a bone marrow transplant program to Southern Nevada. 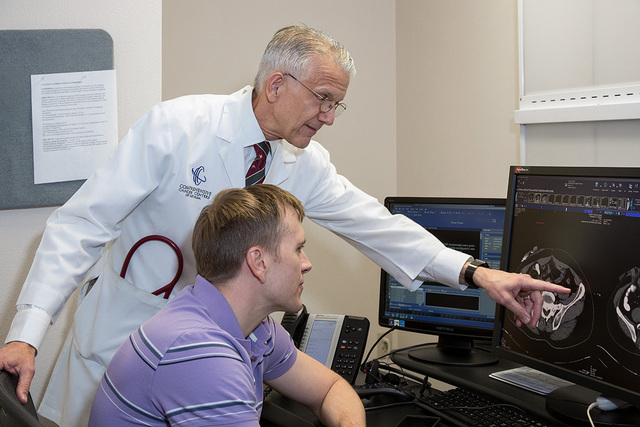 Kingsley, a medical oncologist and hematologist is one of the founding members of the Comprehensive Cancer Centers of Nevada. He wants to bring a bone marrow transplant program to Southern Nevada. The former past president of the Clark County Medical Society and Nevada State Medical Association, Kingsley has been working with Hospital Corporation of America and its global cancer institute, Sarah Cannon, to start a program in Las Vegas, and the process is likely to take several years to implement, he said.

“It’s probably the last undiscovered program or advance that we just don’t benefit from in Nevada,” Kingsley said. “We just don’t have enough patients to justify it. It’s a huge undertaking. Once we get that, I will feel like we have come full circle, and we have brought all of the benefits to Southern Nevada.”

Bone marrow transplant is an old term, and most people don’t understand what it is, Kingsley said. What it refers to is bone marrow stem cells, which have the regenerative capacity to form a replacement of themselves and then create offspring. They supply all of the blood in our bone marrow and blood vessels – the white cells, the red cells and the platelets.

The transplants are for patients who have various hematologic malignancies, such as leukemia, multiple myeloma and lymphoma. Patients receive two types of transplants.

There’s the autologous transplant, meaning the stem cells come from the patient. Allogeneic stem cell transplants come from other individuals, Kingsley said. Usually it’s a related family member but increasingly people who are not related are donors.

The patients who have refractory or relapse type of leukemia or lymphoma and are facing death without some type of heroic procedure are candidates, Kingsley said.

“This machine has the incredible ability to detect those stem cells and retain them and gives the rest of the blood back to the body,” Kingsley said. “The patient will do this one, two or three occasions over one, two or three days. Several millions of these stem cells are collected and kept in these plastic bags. It looks like white, heavy cream. They don’t take all of the stem cells. It doesn’t kill the patient. If you didn’t go any further, they would not be affected by this.”

The patient gets a high dose of chemotherapy that destroys bone marrow and all of the stem cells, and any residual cancer in the bone marrow or elsewhere, Kingsley said. Frozen stem cells removed previously and are then thawed and administered back to the patient by infusing into a vein.

“Those stem cells, when they get into the vein, are like homing pigeons,” Kingsley said. “They know exactly where to go and they head right to the bone marrow, set up shop and start regenerating blood again.”

It takes about two to three weeks for the recovery process, during which time the patients are critically ill with very low blood counts, Kingsley said. Their immune systems are weak, and they are hospitalized with fevers and infections and require transfusions. They require a lot of supportive care to get them through this. But after that, they’re discharged home, he said.

The allogenic transplants, meanwhile, are much more involved, Kingsley said. The process is the same in terms of harvesting stem cells, but it comes from another individual rather than the patient. That donor can be anywhere in the world, and those stem cells are collected in their country, frozen and shipped to the patient for the transplant, he said.

Once they arrive, the process is the same for the patient to receive chemotherapy and enter remission, Kingsley said. Some even get a dose of radiation to their entire body. The reason that must be done first is because a transplant won’t work if the disease is full-blown, he said.

After the patient gets the high dose of chemo, stem cells are infused into their body the same way. The critical difference, however, is these cells now are going to reconstitute bone marrow but are doing so with the immune system of the donor, he said.

“Now, if the patient is a male, and he’s getting these stem cells from a female, then all of those cells that go into him — he basically has the immune system of that woman in his bone marrow and body,” Kingsley said.

“If you do a bone marrow biopsy on these patients after a successful engraftment, he’s going have a female carrier type. It’s not his skin, heart or lung cells, but the bone marrow cells and immune system will be female. But it has no impact.”

The impact and difference with patients getting someone else’s stem cells is they have another’s immune system, Kingsley said. It wakes up and looks around and sees that all the tissue is foreign whether it’s the skin, intestines, liver, brain or lungs. That new immune system will start attacking the body and the patient requires immune suppressive therapy to suppress the immune system so it doesn’t kill the patient.

It’s called graft versus host disease, and it can be fatal, Kingsley said. The patient gets rashes, diarrhea and liver disease and will die without it.

“These patients and many, if not most, stay on that therapy indefinitely,” Kingsley said. “And some come off, and their immune system becomes tolerant and doesn’t not attack the patient. They are off their drugs and living life normally and cured.”

Kingsley said most of their patients go to Southern California since the procedure is usually driven by insurance. He said he prefers to send most of his patients to the City of Hope, which has been giving patients transplants since the dawn of the process, which started in the mid-1970s, he said. UCLA, the University of Arizona, Huntsman Cancer Center in Salt Lake and Scripps in San Diego are other places insurance companies also will send patients, he said.

Kingsley said he would like to see both forms of transplants in Southern Nevada, but the region would start with probably the easier of the two with the autologous transplant. It takes less resources and that would set the stage to advance to the allogenic transplants, he said.

Kingsley, a board member at Sunrise Hospital and Medical Center, said he’s working with Sunrise, which is an HCA Hospital that owns Sarah Cannon, headquartered in Tennessee. It does more transplants than any other system except MD Anderson Cancer Center, he said. Sarah Cannon has centers in Dallas, Austin and San Antonio, Texas; Nashville; Denver; Kansas City, Missouri; North Florida; Richmond, Virginia; and the United Kingdom.

“We would not try to reinvent the wheel in Southern Nevada,” Kingsley said. “We would bring in their expertise. It’s extraordinarily complex and requires supportive care and systems — dietary, radiology, infectious disease and endocrinology. You need all of that supportive care in the hospital to get those patients through those critical three or four weeks.”

Medicare won’t reimburse until after the programs are established and have started performing procedures, Kingsley said. That means upfront capital will be needed for staff and equipment.

“These cost around $100,000,” he said. “There’s not a transplant fairy who drops that bundle of money to the hospital. The hospital has to eat that cost until they’re certified by the federal government to be able to perform these.”

The hospital first would need to recruit some transplant hematologists who would set up the program and work with his group, Kingsley said. Eventually, it would open to other hematology groups in Las Vegas.

“This is all very preliminary,” Kingsley said. “Sunrise Hospital is going to be building a new wing. We don’t know if it will go in that wing or somewhere else in the hospital. There have been discussions about moving the emergency rooms to the new space. That is where the talks are right now. I hope to see this move forward, where we have someone on the ground transplanting within three or four years.”

Kingsley said operating a bone marrow transplant program in Southern Nevada would lessen the social impact on patients and their families. Patients are sometimes away for four weeks but as many as three to four months. That adds to the expense, and people are away from their support system, he said.

“I’m confident with Sarah Cannon’s help, it can be successful,” Kingsley said. “We have the population to support it at 2 million.”

Kingsley said the number of patients leaving the state bone marrow transplants isn’t known, but he suspects it ranges between 100 and 200 a year based on the population the region serves.

“It’s not a big number but when you look at the implications of this, it does impact a lot of people,” Kingsley said.