Skip to content
Sign up for our newsletter
section-ads_high_impact_1
By Linda J. Simpson Special to the Las Vegas Business Press
January 18, 2016 - 5:05 am 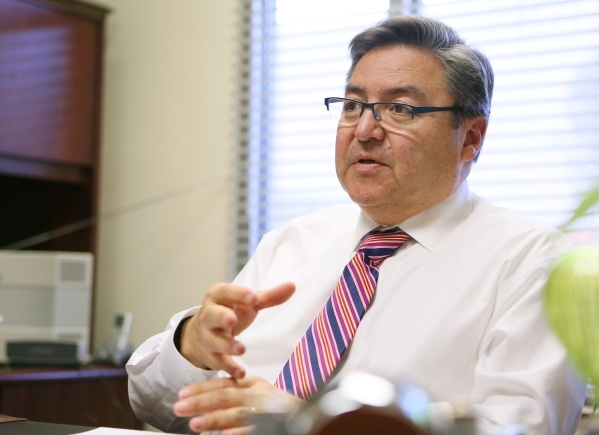 Dr. James Sanchez, an oncologist, talks to a reporter in his office at Comprehensive Cancer Centers of Nevada northwest clinic Wednesday, Nov. 11, 2015, in Las Vegas. Dr. Sanchez specializes in the treatment of various cancer types with a special interest in lymphoma and lung cancer. Ronda Churchill/Las Vegas Review-Journal

The Centers for Disease Control reports that each year, approximately 650,000 cancer patients receive chemotherapy in outpatient oncology clinics throughout the nation.

In an effort to gain insight into the ever burgeoning population of people living longer with cancer, the Business Press recently sat down with Dr. James Sanchez, practice president of local physician-owned Comprehensive Cancer Centers of Nevada. The center was established when two oncology practices that had been in business locally since 1974 — Southwest Cancer Clinic and Nevada Radiation Oncology Centers — merged to form a group practice in 2000. In 2002, they united under one name — Comprehensive Cancer Centers of Nevada.

The tired old joke of heading for McCarran Airport for good medical care is no longer the case, according to Sanchez. As local treatment centers have grown, more people are staying in Nevada for their cancer treatment, he said. CCCN now treats approximately 14,000 patients annually, with more than 2,000 of them coming from out-of- state.

The main reason out-of-town patients come to CCCN is for clinical trials. Las Vegas is a big drawing card for attracting out-of-state patients, explained Sanchez. When a clinical trial is conducted in multiple facilities nationwide, the choice often becomes location for the patient and their family. Many choose here because of the rates on flights and hotels. Las Vegas amenities make it an attractive medical destination for both the patient and their family.

A recent affiliation with USC Norris Comprehensive Cancer Center, a leader in cancer research, has dramatically increased the number of clinical trials available to CCCN patients.

“Between the two institutions (USC and CCCN), we have 370 clinical trials that will be available,” said Sanchez. “Most universities have 100 to 120 — 370 trials is mind boggling.”

The large nationally known cancer centers that advertise here are “all getting antsy,” said Sanchez. “In markets like California and Utah, they’ve taken the other route too — buying up groups,” Sanchez said. “So if they can’t get you to voluntarily send patients, they’ll buy you out — that’s a big thing on the East Coast.”

Sanchez does send patients out of state for those with extremely rare diseases in which there is a nationally recognized specialist in that disease.

“It ends up boiling down, not to a university, more to a particular specialist who has chosen that as their little line of treatment,” said Sanchez.

As drug costs soar, the only way many patients can afford the drugs needed for treatment is to enter a clinical trial where costly medications are provided free of charge.

“There was a time — we’re talking 20 years ago — the vast majority of drugs used in cancer care were generic and inexpensive but with all the new discoveries – the pharmaceutical companies have become very smart and not allowed these drugs to go generic,” said Sanchez.

Approximately 70 percent of drugs in the oncology market are brand name only with no generic equivalent, said Sanchez.

“That has led to a tremendous rise in the cost,” he said. “They’re projecting drug costs to go up 25 to 30 percent a year.”

A recent Business Press list, provided by Medicare, named the highest Medicare paid local physicians. A quick glance at the roster showed many CCCN doctors made it onto the Top 40 list. Unlike the musical Top 40, this lineup might lead the average lay person to the conclusion that the CCCNV docs must be bringing in truck loads of money from Medicare.

Oncologists pay for the chemotherapy drugs they administer to their patients. The Medicare list shows what the provider was paid but doesn’t factor in the cost of drugs supplied by the doctors.

“We as physicians in business buy our own drugs,” said Sanchez. “We then treat our patients and bill the insurance.” He explained, “The reality is the more costly a drug is – our margin is minimal.”

Sanchez estimates approximately 30 to 40 percent of medical oncology practices are now owned by hospitals because the practices can’t afford drug costs. He predicts similar drug increases in not only oncology but all medical disciplines across the board.

“Health care reform answered the issue pertaining to the cost of medical care but it stayed completely away from the drug cost,” said Sanchez. “Sooner or later, somebody will have to deal with that.”

Prompted by Medicare and other big insurers, doctors are now encouraged to provide a higher quality of all-encompassing care for their patients, which in turn lowers the level of health care costs by lessening the need for hospitalizations.

CCCN uses a multidisciplinary approach to provide what Sanchez calls one-stop shopping. “We can basically say — we will take care of you from point A through point Z,” said Sanchez.

“The purpose is to do everything we can to care for the patient — not just treat them with chemo but to take care of them when they are sick — or have an infection or nausea,” Sanchez said. “Keep them out of the hospital — if there is one big factor that is even more than drug costs, it’s hospitalizations and that’s where health care (costs) really zooms.”

Sanchez used an example of a woman with early stage breast cancer to explain what the Medicare definition of episodic care will looks like in the future. First diagnostic studies, then surgery followed by radiation and/or chemo then survivorship — long term follow-up studies with treatment for possible secondary cancers or relapses — would be defined as an episode of care, said Sanchez.

“Every one of those episodes are not just a doctor — there are multiple disciplines involved in those episodes,” said Sanchez, in explaining the nature of reimbursements in the future.

The traditional fee-for-service is described by Sanchez as “Detroit making you a car and selling it to you piece by piece — that would inflate the price significantly. If you’re able to put all the pieces (of care) together and give it to us at a reasonable cost — that’s a value- based affordable care,” said Sanchez.