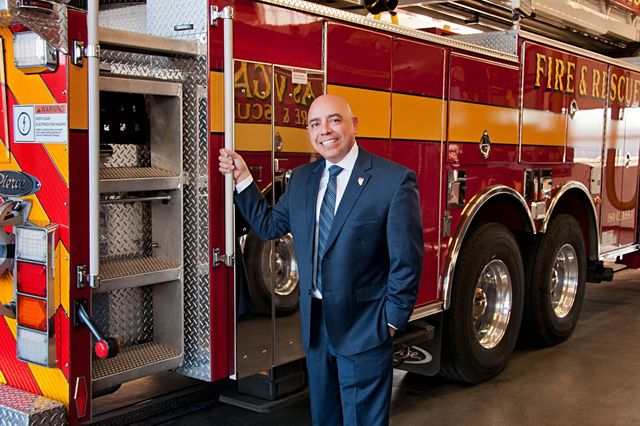 Angelo Aragon was elected in 2016 to the presidency of the Professional Firefighters of Nevada and took office Jan. 1. The Arizona native’s career with the Las Vegas Fire Department has spanned 32 years. He is a father of three children who has represented the Local 1285 union as secretary for the past 23 years.

Q: What drew you to the profession initially?

A: I don’t know. It was a calling. Since I was 8 years old, I knew I was going to be a firefighter. It was just a matter of getting it done. I have been doing it since 1984.

Q: How has it been, settling into the new job?

A:It’s been a little busier than I expected. More travel than I am used to, but it is going well.

Q: What are the biggest challenges on the horizon that you expect to face?

A: I have 19 local (unions) throughout the state. Coordinating all of them to work in one direction has been my biggest challenge so far, (plus) getting to know their individual issues and trying to make that work.

Q: How much of a priority is creating and maintaining strong relations with the public?

A:Presenting ourselves to the public is huge. We are funded through tax dollars, and that is certainly something that we need to maintain. A lot of that comes from the fact that we are so involved in the community, not only through charities but firefighters (individually). We do a ton of volunteer work on our off days. Coaching, counseling, involvement with churches. Many things.

Q: You referred to the state union and locals working on behalf of charitable organizations.

A: Each local is autonomous and can certainly work on charities as they choose, but statewide, the vast majority of us work on a huge amount of charities each year. The Muscular Dystrophy Association is one of our biggest things. And there are tons of things that we do with the Red Cross.

We also sell Nevada Firefighter plates, and the money from that goes to the benevolent fund. And through that fund, we expend money for firefighter (personal emergencies). That serves all the locals throughout the state.

Q: The Clark County Fire Department sick leave abuse probe instigated by County Commissioner Steve Sisolak in 2010 had a negative impact in terms of public perception about firefighters in departments throughout the region. Where do you think you are in efforts to alter that perception?

A: I think we’ve made a ton of progress in that area. I can see the way it was presented at the time. If people don’t have the exact information on how all those things played out and what is involved, they would certainly have a negative opinion.

I think we have done a lot of work since then. We have made great strides in educating the public and telling them exactly how that situation worked. All in all, I think that situation has played itself out quite well.

Q: Speaking of putting out fires, the range of responsibilities that fall to fire departments is much broader than many people realize, is it not?

Q: Where do you feel the departments in Nevada are in terms of resources and personnel?

A:Resources are key. We work very well in the city of Las Vegas, and in this new position, (I am) working with resource issues on a state level. Individual locals do that on their own. We work very well with the different (government) entities to come to a compromise. But my personal opinion is that we need a lot more resources in a lot of different areas.

Q: I understand that the work of firefighters — over time — can take a significant emotional and psychological toll.

A: Post-traumatic stress disorder is becoming one of our biggest medical issues nationwide. They are now equating it to the same stuff you would see in military personnel. I can tell you about calls that I still remember like it was this morning. Certainly, they have an effect, but I don’t believe those calls are what does it.

It is witnessing someone’s family when a loved one passes. A motor vehicle accident, for instance. Picking up that kid, whom you have to rush to the hospital at 2 in the morning — where you see them working on him and somehow never know what the outcome was for that child. If you go to a shooting and there are three people lying there, certainly that is bad, but it is the 2,000 other calls that truly get to you. It is that slow drumbeat every day.

For me, as a captain, I deal with the family notification on scene. It is … (Aragon takes a long pause) quite stressful to do that. It takes a lot. You just have to put yourself in a different mindset. But when you walk away from that, it remains with you.

I have seen young people come into the station (having experienced a traumatic call) for the first time; it certainly affects them more than it would me, and that is also something we have to deal with — to take care of our personnel.

We have a critical incident stress person that works for us, and she is good at what she does. But, to be honest, when you ask someone else to come into what we consider to be a family, I think we lean on each other a whole lot more because we understand it.

When I first came on, it was the mentality of ‘just suck it up.’ That is what you do. You signed up for this. I don’t think there was the understanding then that this truly has a (longtime) effect.

Divorce rates are through the roof. That used to be a joke with firefighters, but it is the reality. Dependency problems are through the roof, and that, I believe, is a direct result of the work we do. Suicide rates are astronomically high — double what it is in the general population. It has a huge effect on you and your family.

Through our international union, we just created our first hospital for PTSD. It is in Maryland. It is a pilot program, and the plan is to expand that throughout the country.

Q: What achievements throughout your career are most personally meaningful?

A: As far as safety for firefighters in the state of Nevada, we have made strides that are incredible. I remember when I first got hired. The turnouts — the equipment that we wear — they were laughable by today’s standards. And I think we had a huge part in making those strides for firefighter safety.

On the firefighting side of it, the hundreds — if not thousands — of differences we’ve made in the public and their lives. The positive outcomes.

Q: This question comes from my 7-year-old daughter: Do you really rescue small animals from trees?

A: (Laughing) Not so much anymore, no. And there is a reason for that. They usually will come down on their own. But we had a fire just yesterday where we rescued three dogs. So rescuing animals, definitely. Out of trees, not so much.