Skip to content
Sign up for our newsletter
section-ads_high_impact_1
By Carla J. Zvosec Las Vegas Business Press
March 13, 2017 - 12:07 am 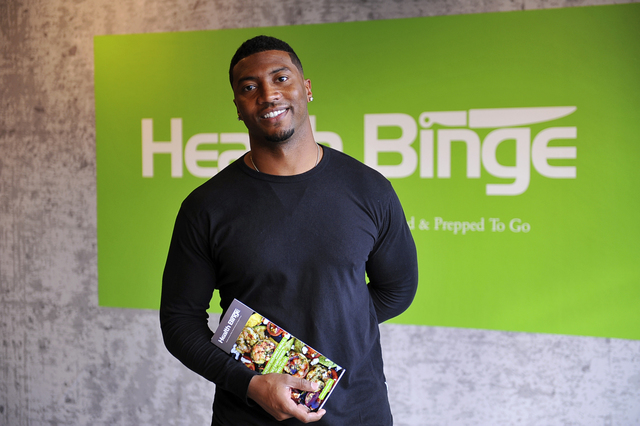 Former NFL safety Gerome Sapp completed an Executive Master of Business Administration degree program while playing pro ball. He played for the Baltimore Ravens twice and the Indianapolis Colts and served as a captain of both teams.

Pursuing his passion for health and wellness, Sapp founded Health Binge, which sells freshly prepared, healthy, portion-controlled gourmet grab-and-go meals that are designed to be nutritious yet convenient. Sapp opened his first Health Binge location in December at 6040 Badura Ave., near Jones Boulevard and the 215 Beltway in Spring Valley.

This month, the new company announced a partnership with EOS Fitness to expand into 14 Arizona and Nevada health clubs. Sapp also expects to open more independent retail spots throughout Southern Nevada in the next year.

The concept for Health Binge began to germinate while Sapp was attending the University of Notre Dame, where he played college football. It was in his role as a captain of the team that Sapp realized a need for his fellow players to have access to quick, healthy meals containing proper nutrients for increased focus and overall well-being. He addressed that need by creating a grab-and-go-meal system for his teammates that was later introduced to the entire student body.

Combining his professional sports training experience and nutritional convenience, Sapp developed his fledgling grab-and-go-meals idea into the healthy, gourmet “fast food” retail concept that is Health Binge. Seeking guidance from top-rated gourmet chef Roy Daley, who now works as a culinary adviser to the company, he created the initial menu for Health Binge.

Q: How did it come about that you developed a grab-and-go meal system for your Notre Dame football teammates while you were the captain of the team?

A: Part of being a captain or a leader is listening to the needs and wants of the people you lead. I knew what my teammates’ pain points were around managing their time and proper nutrition. As athletes, we didn’t have time for much at Notre Dame! So I helped create a system that gave us a convenient way to get the proper nutrition our bodies needed as a direct response to my teammates’ complaints.

Q: What did the plan consist of? Do you feel it accomplished what you hoped it would?

A: The system was simple: The other captains and I wanted to provide the athletes with all their carbs, proteins, etc., as quick and easy as possible in a grab-and-go format. Athletes came in, grabbed a bag, stuffed it with various cold packaged food items — PB&J was my favorite — then grabbed a beverage and exited. Although it was very rudimentary — ham and cheese, tuna and PB&J sandwiches, fruits, nuts, cheese, milk, juice — it worked great because it solved the problem it was created for.

Q: When did you leave the NFL to pursue your entrepreneurial goals? Was it a difficult decision for you to make the transition from professional football player to businessman?

A: I decided to retire in 2008–2009 because I felt I was falling behind in the race to find my life’s purpose in business. Surprisingly, it wasn’t a hard decision at the time because I had no regrets. I played the game with a relentless attitude, and it started to take a physical toll on me. I felt that it was time to move on to the next chapter of my life.

(But) the transition from NFL athlete to businessman was actually harder than I thought. Not because I wasn’t prepared for the challenge; because I attacked business the same way I attacked and prepared for football. It was hard because many businesspeople don’t operate with the same integrity and work ethic that football taught me. If I say I will do something, I’m going to do it and do it to the best of my ability. That’s how I was raised and what football instilled in me on a deeper level. The world of business doesn’t always operate like that.

Q: Did the challenges you faced in regard to your body and health during your time in the NFL influence or steer you toward creating a business focused on promoting health and wellness?

A: Yes, football is a violent sport, and my body definitely paid the price. I mean, I signed up for it so I’m not complaining. But as a remedy to the beating my body took, I adopted a healthy approach to my nutrition and overall wellness. That included consuming aspects of the G-BOMBS (greens, beans, onions, mushrooms, berries and seeds) diet on a daily basis when I retired.

So when it was time to start Health Binge, I felt it was only fitting to use the G-BOMBS diet as the base diet (that) all of our meals are created around. If that could help my body feel better after eight surgeries and a fractured back, I felt that it would work miracles for our customers!

Q: Describe the process you went through in developing and implementing your idea of opening a retail concept like Health Binge?

A: The initial idea started on the back of a course syllabus in my Intro To Entrepreneurship class at Harvard Business School. I wrote a business plan for the idea during that course but never did anything with the concept until I moved to Las Vegas.

I started an emerging media tech company three years ago, which attracted the investment of Tony Hsieh. As part of the investment requirement, I had to relocate to Las Vegas. I told myself if my tech company didn’t work out, the first company I would start would be Health Binge because Vegas was the perfect market for it.

Once I understood the industry, I then needed to find a chef and start developing and testing menu items. Once people started not only paying for the food but coming back as return customers, I knew it was time to open up the retail portion of the business.

Q: What assistance did you seek out in creating the menu for Health Binge?

A: Aside from God’s assistance, I looked for assistance in areas that I knew I had weaknesses, starting with the culinary aspect of the business. Then I sought out assistance in the retail aspect by adding on an adviser that managed one of my national competitor’s stores.

Q: What are your goals for Health Binge, and why did you choose Las Vegas for its location?

A: I see Health Binge not only growing to have a national footprint but also a footprint in airports and gyms all around the world. Las Vegas literally chose me! I think everything in life happens for a reason, though.