Skip to content
Sign up for our newsletter
section-ads_high_impact_1
By BUFORD DAVIS LAS VEGAS BUSINESS PRESS
January 2, 2017 - 3:43 am 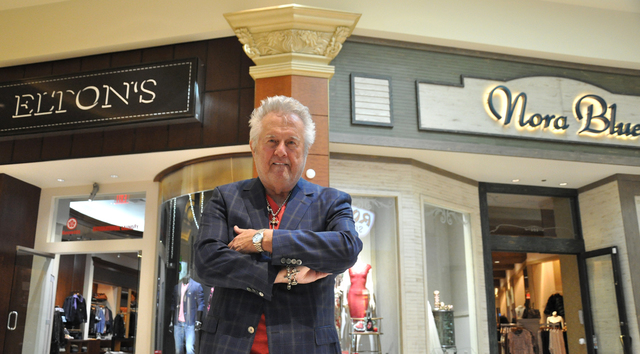 Q: How did you get your start in the business?

A: In 1966, there was a famous men’s store that opened when Caesars Palace was new, called Cuzzens. I lived in Houston and had the reputation of being a creative guy. They were looking for someone to run their Houston operation. So I joined them in 1969, and I stayed with them for 26 years. We were the only store of its kind. We did ensembles for Elvis, Frank Sinatra, Sammy Davis, Jr. Also Mr. (Kirk) Kerkorian, I made his Brioni clothing for 10 years.

When Steve Wynn opened the Mirage in 1989, he asked Don Fine — founder of Cuzzens — and myself to join him in that venture. So I opened the D Fine store at the Mirage.

Q: What is the origin of Elton’s?

MGM came to me and said, “We would like for you to open a women’s store, because the men’s store has done so well.” So I opened Nora Blue — named after my late mother and her favorite color — about 12 years ago, and it has done very well.

Q: Is there a significant difference between a men’s and women’s apparel store in terms of marketing and customer service preferences?

A: I have found that in the women’s store, it is very competitive, because there is no shortage of great women’s stores. Women are shoppers. They will look at stores all day and maybe at the end of that day come back and buy that certain dress. So it is a harder business. Because sometimes women will want to go into a dressing room with 15 or 20 items and think about it. It takes a lot of tolerance and a lot of patience.

Plus, there is no shortage of women’s apparel suppliers in this country. You have to really research to find the direction you want that store to have. When I got into it, I said we are going to deal in specialty and impulse items. One lady looked at me one day and said, “Do you have anything in this store you don’t have to have big hair to wear?” In some instances, that could be an insult. But she has to understand that we are not Ann Taylor, and people don’t come to me for that. Women enjoy embellishment. Not all women, of course, but that is what the store stands for. Kind of like what we do (at Elton’s).

Q: One of your success keys seems to be the curation of merchandise to create a distinctive brand identity.

A: We try to make it unpredictable and unique. But that is our DNA, why people come back to see us. I like to say that our customers are customers of all fine men’s stores throughout the country — maybe the world. So when they come to town, they get caught up in the very energy that has driven Las Vegas from Day 1. They become impulse buyers. They are mesmerized by the store. I always tell our (sales staff) that our job is a little bit tougher, because this customer comes in from some great stores and great products. I think we are item-driven, and I think that is what they see when they come here. We have developed a large clientele over the past 13 years.

Q: What are the biggest business challenges you are facing?

A: Privately owned men’s and women’s specialty stores — the recession has taken its toll on stores like this throughout the country. There used to be six of them here on the Strip. They are all out of business now. We are actually the only privately owned men’s store on the Strip, and the economy has just taken its toll. Amazon, the internet, people coming in with their cellphones, maybe take a picture of a shirt they have never seen, then see if they can get it cheaper online. So it is a different customer that does those sorts of things. That hurts all of retail.

We are an old-fashioned men’s store. We still have window trimmers — which is unheard of in this country. We have a full-time tailor who knows the artistry of the business – who can take a sleeve off and put it back on like it should be done. If a jean needs to be shortened, we take off the bottom, do the alteration and re-attach it. We do it the right way. There is a huge expense for that. I think if Neiman Marcus did that, the alteration charge for a pair of jeans automatically would be $100. But we still offer that. And our sales people attend a lot of seminars that keep them in touch with product knowledge.

When a customer comes in, the first thing they will say is, “I’m just looking.” But I think they soon realize that this person is a professional who can suggest certain things. Guys have limited creativity. So after they see that certain item that sparks their interest, the (sales staff) comes in and helps them put a whole ensemble together.

Q: Does being independent allow you to be more creative in your offerings than corporate clothing retailers?

A: Yeah, we are a lot smaller and can specialize in those special touches the customers are starving for. And once they get that customer service, they never forget it. It might be a little harder to break the ice when they come in, but once we do that, they find the store to be very friendly.

All great stores were developed like this in the beginning. Neiman Marcus, Nordstrom, Saks Fifth Avenue — they all specialized in great window trim, tailoring and product. We are a page from that book, except that we do not deviate from it.

We go to the Pitti Uomo shows in Florence twice a year, and also to Cologne, Germany, looking for ideas and concepts, new manufacturers that we can bring back to this country.

A lot of stores here carry the same products and the prices vary from store to store. We have to work to differentiate ourselves. Don’t think those big stores don’t shop us. We do all the leg work, then they come in and buy it, and before you know it next season that big store carries the whole brand. That’s why we have to keep researching the market and find those startup companies that aren’t known yet.

Q: Your stores do not offer merchandise online. Is that going to change at some point?

A: Yeah (sighs). We are definitely going to do that. It is so hard when you develop an inventory like I have and then when you put it on the internet, it is there for everybody to see. That includes the big retailers. Maybe they see a great shirt for $125 and say, “man, this is a great collection. We have to get that.” They go and buy it and — because they have more buying power — they sell it at $95.

In other words, we are a specialty store and that is very hard to translate into an online store where people don’t have the opportunity to try it on and understand exactly what they are looking at. We are not mass merchandisers. It is difficult for me to do that, and it opens up too many avenues where people can knock us off.

Q: There is an increased awareness that working conditions in apparel manufacturing can range from poor to openly exploitive, particularly in developing nations. Do you believe we will reach a point where enough customers will demand change — at the expense of cheaper goods — that those situations will improve?

A: Boy, that’s a good question. That is a huge issue driven by consumers wanting cheaper prices. And that itself is what has driven a lot of manufacturing into Turkey, China, Vietnam. Slave labor camps, sometimes, if you will.

I think the uninformed are driven by price, not quality. We try to reach a happy medium. Even though we do use China, we try to use better manufacturers. Turkey is producing some beautiful products, but I am very concerned about the (social and political) situation there and don’t know if they will be able to keep on the same way.

Q: What other changes are on the horizon?

A: About five stores down (in The Shoppes at Mandalay Bay Place), they are going to build a station for the tram that runs from the convention center. The traffic that is going to bring here will be huge. I think we will be the recipient of that.

There is going to be a redevelopment here, talks about a new name for the center and bringing in more high-end specialty stores. They believe the future is being not like everybody else in town but unique and different. There are only 40 stores here now, but the new monorail traffic should bring customers more consistently. It is supposed to take place at the end of 2017 and we are excited about it.